What is MORA therapy?

MORA therapy is a painless therapy where the patient is sitting holding electrodes with hands and feet resting on a plate with other electrodes.

Before responding to being asked, do a bit of history to know what were the scientific basis that led to Dr. Morell and Ing.Rasche create the first machine MORA. 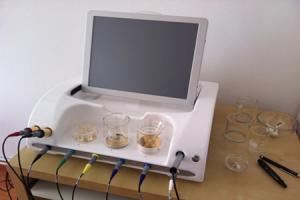 1939 American astronomer Gustav Stromberg stated that the structure and evolution of living beings are subject to systems of intangible waves. These forces, which he calls “living areas” have the ability to form molecular bonds of great complexity and classify them for conversion into living matter.

1940-1945 a study at Yale University under the direction of Professor Burr, concluding that was conducted “all living organisms have complex nature electric fields. These fields disappear completely with death”.

1975 Dr. Franz Morell and engineer Erich Rasche, based on the findings of the time they develop a transmitter-receiver system test (TSE) which electronically transmitting electromagnetic radiation of drugs in the measurement of electro acupuncture. They were the creators of the first machine MORA.

1976 Dr. Fritz-Albert Popp, a German physicist discovered bio-photons and later shows that all biological processes are attributable to electromagnetic interactions.

In light of these findings, it is concluded that there are two very important bodies in our body. On the one hand the physical body with all its structures, systems and biochemical processes that move. And secondly the electromagnetic body which is invisible and whose functions do you permanently change its brightness and continuously change their shape and location.

The energy body has no specific limits, is a communication system highly developed, consisting of electromagnetic wave and photons permanently exchanging information at high speed within and between cells. Furthermore dominates the events that are known to us as the nerve fibers, hormones and other molecules.

If electromagnetic waves exist, can measure and use their radiation in a technical way, which leads us to corroborate that can be transmitted from useful and practical to electromagnetic body of people and animals so.

These are the conclusions I came to Dr. Morell and Ing. Rasche and created in 1973 the first machine MORA. Today more advanced model which is on the market is the MORA Nova.

The person is treated from their own vibrations, i.e. using their own physiological and pathological information.
This is not the incorporation of voltages, currents or external frequency but rather a self therapy with electromagnetic information or the body’s own magnetic micro practiced.

One of the fundamental principles of therapeutic action in the body is the reversal of pathological vibrations under molecular absorption circuit developed by MORA with. This type of vibration can undo the molecular bonds of harmful substances to the body.

The physiological vibrations are those who build and maintain the body healthy. With the use of MORA are returned to the person, of an amplified and unaltered manner, thereby forming the so-called bio-cybernetic control loop.

To whom it may concern

It targets both healthy people and people with organic imbalances.

Everyone can benefit from the MORA therapy as always the vibrational level of the person is used.

Can use a lot of programs already defined in the standard machine MORA; they may try acupuncture meridians both excess and defect, neutralizing substances such as environmental or toxic heavy metals. Or enhance certain substances like vitamins, minerals and amino acids for the organism can assimilate more easily.

On the other hand can be done studies where certain substances and organic effect produced are analyzed.